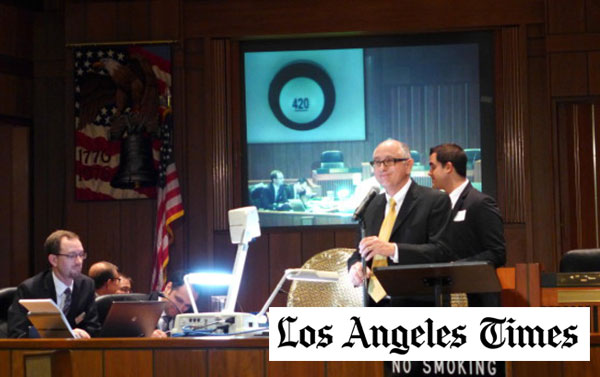 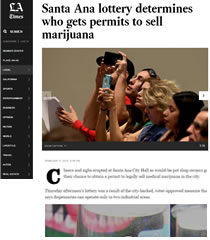 Santa Ana lottery determines who gets permits to sell marijuana

Cheers and sighs erupted at Santa Ana City Hall as would-be pot shop owners got their chance to obtain a permit to legally sell medical marijuana in the city.

Thursday afternoon’s lottery was a result of the city-backed, voter-approved measure that says dispensaries can operate only in two industrial areas.

Among the lotto winners was rapper Louis Freese, better known as “B-Real” of the hip-hop group Cypress Hill, whose lyrics often reference marijuana. Freese, who plans on opening a collective called Dr. Greenthumb, said he wants to bring “responsible, quality medication” to people in Santa Ana.

Applicants were selected during a lottery overseen by an independent accounting firm to ensure impartiality, city officials said. With more than 600 application fees paid at $1,690 each, the city brought in about $1 million in revenue. The city won’t have a complete list of winners until Friday.

The randomly selected applicants now move on to the Regulatory Safety Permit phase of the process; that application costs $12,086 and is submitted to the Santa Ana Police Department. People can start applying for the permit Friday; the city then has 60 days to review the application.

“These collectives create jobs, and that gets overlooked. They can create different revenue streams,” he said. “This is a tremendous opportunity for us. We’re glad we’ve been selected.”

Under the new measure, collectives must be 500 feet apart and 1,000 feet away from schools, parks and residential zones. The dispensaries’ gross receipts will be taxed 5% and could be raised to as much as 10%, said city spokeswoman Tanya Lyon. Cultivation is not allowed.

Medical marijuana is legal in more than 20 states, according to the National Conference of State Legislatures, though it is listed under the federal Controlled Substances Act as a drug with “no currently accepted medical use and a high potential for abuse” — a designation it shares with heroin and Ecstasy.

But just this week, the U.S. surgeon general seemed optimistic about marijuana’s potential.

“We have some preliminary data showing that for some medical conditions and symptoms that marijuana can be helpful,” Dr. Vivek Murthy told “CBS This Morning.” “So I think we have to use that data to drive policymaking, and I’m very interested to see where that data takes us.”

Grant and Patti McCormick said they know the benefits of medical marijuana firsthand. Both use it to alleviate pain: Grant for chronic arthritis and Patti for migraines. The couple attended the public meeting to support a friend who was ineligible for the lottery because of the location of his dispensary.

“It’s great that Santa Ana is willing to do this. Some regulation is needed,” Grant McCormick, 64, said. “It can’t be the Wild West.”

Edmundo Serafin was ecstatic when the accounting firm announced the second ball, marked 337. It was his number.

Serafin and two other friends had marijuana collectives of their own, but closed them in anticipation of the lottery. They expect more than 500 patients for their grand opening, he said.

It’s a relief to have the chance at a legitimate business, he said.

“Before this, you were waiting to see if the DEA was outside, or if your shop had been cleaned up,” he said.

“We want legalization so patients can have safe access to medication,” Serafin said.